COVID-19's impact on the supply chain in Japan

The global outbreak of the new coronavirus disease (hereinafter referred to as "COVID-19") is becoming unstoppable, and there are immeasurable effects on the real economy caused by the spread of COVID-19.
Since the beginning of the 21st century, Japan has experienced large-scale economic crises such as the 2008 Financial Crisis caused by Lehman Brothers collapse and the Great East Japan Earthquake in 2011, whilst the "Corona Shock" seems quite different from these two. This time, the economic shock is (1) caused by the invisible thing called coronavirus, (2) the damage is spreading on a global scale, and (3) the movement of humans and goods is restrained. The greatest challenge is of course the prevention of infection spreading worldwide through the development of specific medicine.
The impact of the spread of COVID-19 on the Japanese economy could be classified into four categories: (1) decrease in inbound tourists (foreign tourists visiting Japan) and its consumption, (2) disruption of the supply chain, (3) decline in exports and willingness towards capital investment as the global economy deteriorates, and (4) economic downturn due to deterioration of economic activity. Amongst these, (2) disruption of the supply chain would be more closely associated with logistics.
The problems have been almost resolved now, but at one point, paper products such as toilet paper and tissues have bought up in many retail stores in Japan. Most of the paper products are domestically produced. However, some people deceived by rumours spread on SNS that imports from China will stop suddenly rushed into shops and bought up those products, which is known as "panic purchases." On the other hand, about 80% of masks are imported products, and most of them are from China. Therefore, even if domestic manufacturers double the production of masks, the shortage problem will not be settled for the time being. The slump of imports from China had also impact on the construction industry, such as housing construction has been stopped because building materials from China had not been imported. These are the final goods, but with the suspension of production of intermediate goods (processed products, parts, etc.) in China, disruption of the supply chain also occurred.
Wuhan City in Hubei Province, where COVID-19 originated last year, is a transportation hub in inland China, and many production bases of the manufacturing industry such as automobiles are concentrated. Due to the continuous suspension of operations at these production bases and the delay in the supply of intermediate goods to the Japanese manufacturing industry, some production lines at domestic plants were temporarily stopped in the Japanese automobile manufacturing industry. 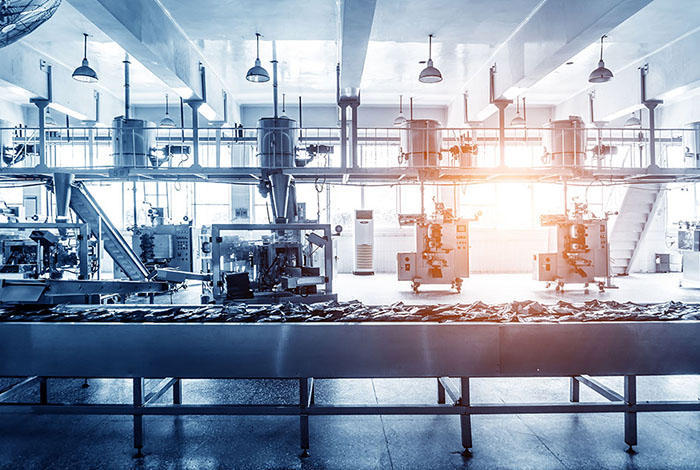 The following table shows the percentage of imports from China by trade in goods in Asia (Japan, Newly Industrializing Economies (NIEs), ASEAN, India), the United States, and EU28 (including the United Kingdom). As for final goods, the import ratio of capital goods from China is 50.3% in Japan, which is higher than that of other Asian countries, and that of consumption goods is also high at 31.6%. As for intermediate goods, processed goods account for 16.6%, which is not that high compared to other Asian countries, whilst parts and components account for 30.3%. In other words, Japan is a country that depends largely on China and thus it is easily affected when something happens in China.
Although the movement of "China plus one" strategy is advancing as the country risk in China increases, Japan's supply chain dependence on China still remains high. Every time something happens, the need for "diversification of manufacturing bases for risk dispersion" is remarked, but Japanese companies seems slow to take actions on diversification of procurement.

Table: The Percentage of Imports from China by Traded Commodity, 2017 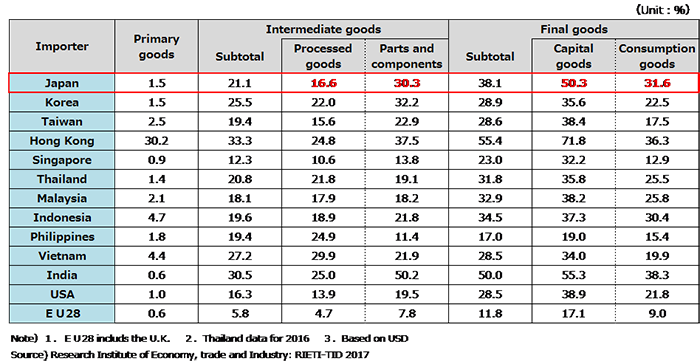 This report was written based on information as of 2nd April, 2020.

Our team is ready to answer any questions that you may have.